Its roots go back to the 1930’s when it was first introduced by Eberhard Faber. In 1998, after several corporate acquisitions, it was discontinued, but not forgotten. In fact, fans began paying as much as $40 on eBay for a single Blackwing pencil.

Artists from across the world soon noticed that Palomino’s range of premium pencils provided a comparable performance to the Blackwing and asked them to consider reviving the iconic brand. Palomino founder and CEO Charles Berolzheimer, whose family’s roots in the pencil industry date back to the mid 19th century, used his unique supply relationships to re-introduce the Blackwing pencil, both in its original form (the “602”) for devotees, writers and everyday users, as well as a modified version with a slightly softer lead for artists.

Claimed by many to be the best writing utensil in the world, Blackwing pencils are famous for the quality of graphite, iconic shape, and the people whose works they’ve inspired throughout the years.

All Palomino pencils use high quality graphite leads produced exclusively in Japan. In general, Palomino graphite pencils are much smoother than more commonly available pencils due to the special formulation and processing methods used in the manufacturing process. Japanese consumers also prefer a darker and softer laydown so all Japanese-produced leads tend to be a bit softer and darker along the HB grading scale. This leads to differences of up 1 to 2 degrees versus what you might be used to in other pencils.

The Blackwing Matte Black pencil features a matte black finish, gold imprint, black eraser, and soft and smooth graphite core that is perfect for artists and musicians. (approx. 4B) Ideal for musicians, woodworkers and anyone who prefers a soft, dark line, the Palomino Blackwing is the softest of the four core Blackwing models. Blackwing Black Matte pencils come in a box of 12 that can double as a pencil cup.

The Blackwing 602 pencil features a grey finish, gold imprint, pink eraser, and firm, smooth graphite for writers. Praised in the New Yorker, the Blackwing602 features firm, smooth graphite that delivers “Half the Pressure, Twice the Speed.” (approx. B hardness) Blackwing602 pencils feature a gunmetal grey finish and iconic square ferrule with a pink eraser. Blackwing 602 pencils come in a box of 12. 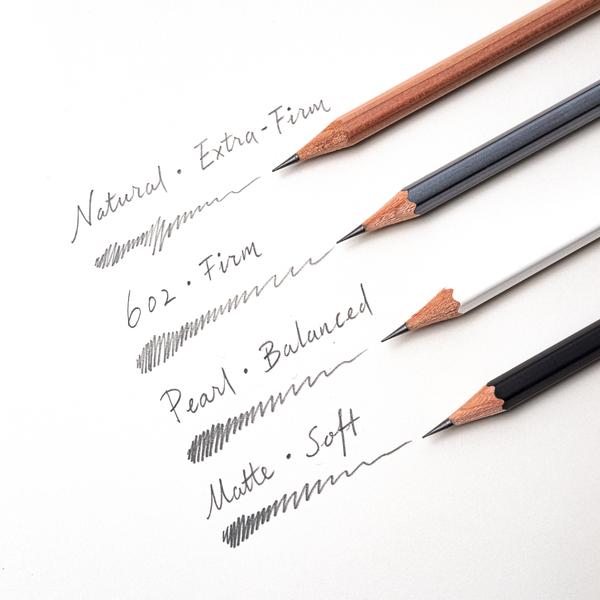