The Stoneground Paint Co. crafts their watercolours by combining finely ground pigment with a binder of water, gum arabic, as well as honey. Watercolour is a noted for its transparency and the wide range of effects it can create. They use a range of pigments in the creation of their handmade paint, from modern to mineral, traditional to pearlescent. As a result, Stoneground offers watercolour artists an array of vibrant colours and sets to choose from.

Also available in a small Earth set as well as an Earth set specifically created for Canadian Prairie Landscapes. 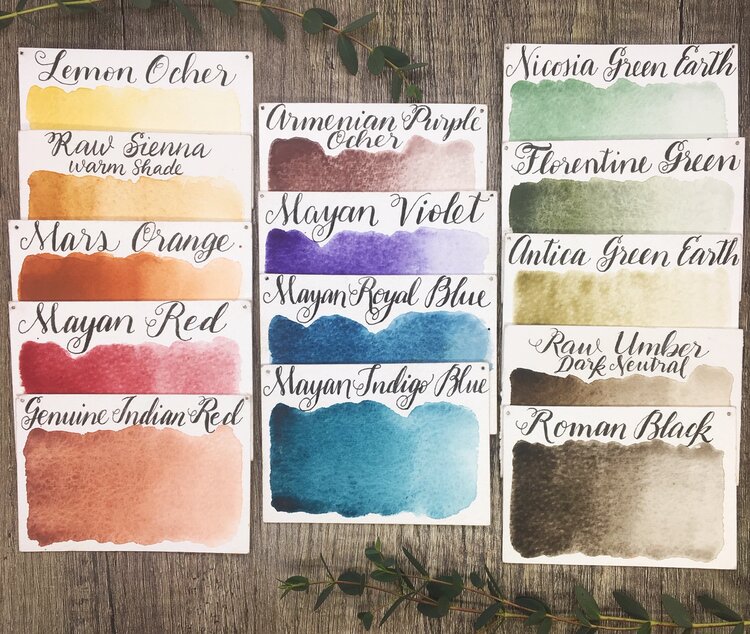 The pigments used in the creation of Stoneground Traditional Colours are ones that have been used by artists for hundreds, and in some cases, thousands, of years.  These are primarily inorganic pigments such as iron oxides, green earths, and the popular umber and sienna pigments of the Renaissance.  Also included here, are modern interpretations of traditionally used pigments such as Zinc and Titanium White, which replace toxic Lead White. Additionally, the Mayan pigments are modern versions of lightfast and permanent pigments used by civilizations in Central and South America hundreds of years ago.

Stoneground modern colours consist of pigments developed after 1704 with the accidental discovery of Prussian Blue. The development of synthetic pigments have given artists a veritable rainbow of to choose from. All of the modern colours in Stoneground’s line-up are lightfast, permanent, and non-toxic.