3 in stock (can be backordered)

Iridescent Moonstone reflects in shades of white and deep silver—a perfect choice for fish scales or moonlit water. Iridescent Moonstone shows up as a silvery gray on white, but when applied over black becomes a glowing silver-white–like the reflection of the moon on a night-darkened sea. Iridescent colors reflect light and their transparent quality adds a fascinating sense of depth to your work. Why Luminescent Watercolors? Nature has optical surprises in the colors that you see in bird feathers, insects, fish, and seashells, as well as many flowers also have a pearly, dewy sheen to them. Consider the iridescence of a snail’s’ trail or a silvery spiders’ web. Other things that also have a sparkle, or glow depending on the light, a silvery or golden moon, clouds aglow at sunset, rainbows, the sparkle of snow and ice, and glint of water reflections. Don’t forget the sheen of metals like pewter, copper, silver, and gold. There are also mythic subjects that are often thought of as having a special iridescence to them such as fairies, dragons, mermaids and other fantasy figures. DANIEL SMITH Luminescent Watercolors add that touch of special color found in nature that regular colors cannot match. They’re made from mica pigment, thin transparent particles coated with highly reflective metal oxides. Luminescent Watercolors show best as glazes over darker colors and are excellent mixed with other colors adding a bit of their luminescent glow. 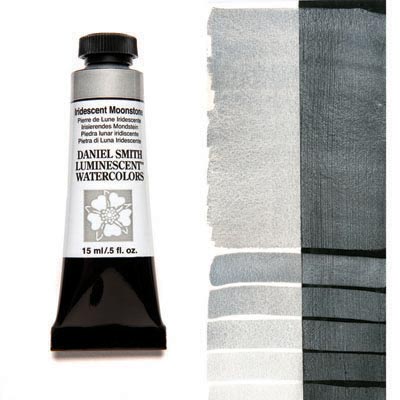